Reasons to Doubt a Continuation of the Selloff

2712 = sp low for the week = ~1 stdev from the post-election mean regression. Fairly orderly sell-off so far. Near-term downside from here is probably limited. Market should chop sideways for at least a few weeks, as shorts pile in only to get squeezed and shoestring longs sell out to limit losses. 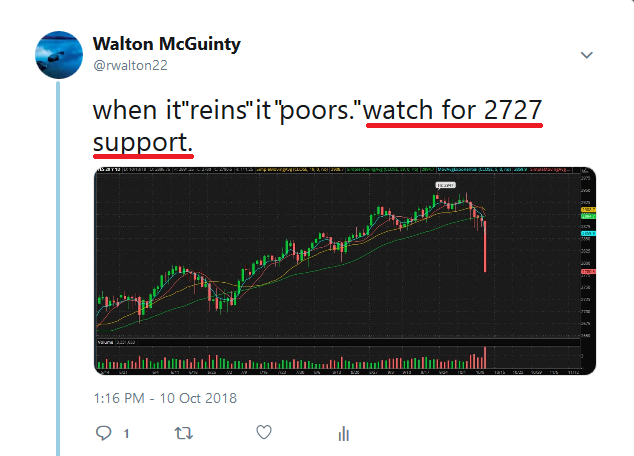 Shorts have several reasons to be skeptical about a continuation of last week's selling.

A maxim of Jesse Livermore's evokes one of the many doubts one has in regard to the validity of last week's selloff:

"A market does not culminate in one grand blaze of glory. Neither does it end with a sudden reversal of form. A market can and does often cease to be a bull market long before prices generally begin to break."


Qualitative Factors
Firstly, the sharp, indiscreet nature of last week's selling may foreshadow an abrupt wash-out that precedes the annual Santa Clause rally. Stocks usually rally into the Christmas break and into the new year, as companies - primarily retail - get an earnings bump due to Holiday spending. Beginning the Santa Clause rally at all-time highs is a bit overstretched, considering valuations aren't exactly cheap. Last week's correction and close above the SMA200 provides the perfect launchpad to possibly retest all-time highs by year end.

Secondly, real unloading by the big hands is seldom done indiscriminately - let alone within a week's time. It's usually spread over weeks and months, in order to maximize gains and minimize losses, and reduce the overall effect that their own selling has on prices. Fundamental selloffs, or complete reversals in market sentiment, take place within an environment of consistent, controlled selling, marked by moderate rallies and tight daily ranges.

Finally - the market fearmongers have reemerged en mass. The Perma-Bears are out in full force with more conviction than ever. From the Schiffs to the Stockmans - they've all published articles and videos over the weekend prophesying that last week's move is just the beginning of the end. This usually marks a near-term bottom. I wouldn't enter any new shorts while the bears have their chests puffed out.


Federal Reserve in Spotlight
There are also four relatively recent factors that may cause the Fed to reconsider another rate hike in December: (1) Weaker than expected Consumer Price Index data for October: CPI ↑ 0.1% actual vs ↑ 0.2% expected; (2) Jobless claims came in 7K higher than expected; (3) The magnitude of last week's sell-off; (4) Trump's persistent public criticism of Fed policy.

The US is already paying the third highest interest rate in the G8, and is one of only three countries paying positive real rates on 10 year money (0.513%). The other two G8 nations without negative real interest rates are Italy (1.81%) and Russia (5.41%). Every other G8 nation is currently borrowing 10 year money at a negative real rate; i.e., they're borrowing $1 and paying back less than $1 at maturity, after discounting for inflation. If Fed policy continues to diverge from other major central banks, then rising debt servicing costs could become the most important fiscal issue in the US - something Powell likely wants to avoid at all costs.